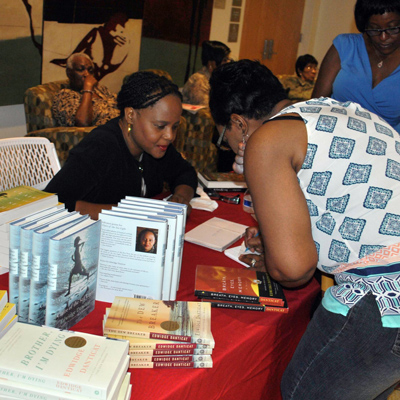 Li paj sa a an kreyòl.

Miami Book Fair is partnering with Sosyete Koukouy of Miami, Inc., to present the Little Haiti Book Festival on Saturday, May 27 and Sunday, May 28, 2017. This book festival, which features two days of vibrant cultural exposure to writers, booksellers, performers, and more, is part of Miami Book Fair’s ReadCaribbean programming.

This event, which is free and open to the public, will take place at the Little Haiti Cultural Complex, 212 NE 59 Ter. Miami, and at Libreri Mapou, 5919 NE 2nd Ave, Miami, FL.

The Little Haiti Book Festival will feature authors from Haiti and the Haitian diaspora, literary panels and craft talks, workshops for writers, hands-on activities for children, a film screening, a dance workshop, poetry, dance and music performances, and more.

“Haitian Literature: Resilience & Sustenance” / “Liv Ayisyen: Pote Kole pou Ayiti pi Djanm” *
Authors Marie-Alice Théard and Jean-Claude Exulien will explain how books expand the mind and allow us to create new paths for ourselves, and why using our imaginations, and providing for others to use theirs, is an obligation for all, particularly Haitian citizens, in their quest for resilience and sustenance.  *A presentation in Creole with simultaneous interpretation in English

“Literati Natif Natal”
Authors Pierre-Michel Chéry and Anivince Jean-Baptiste will examine modern Haitian Creole literature, and explore why Haitian Creole is the language of choice for many writers who engage the personal negotiations of culture, history, social reform, identity, and art. The panel will also address the diversity of literary texts in Haitian Creole, and writers’ on-going efforts to reach a broader audience.  *A presentation in Creole with simultaneous interpretation in English

Kids Writing for Kids + Bookbinding / Rankontre Jèn Ekriven Nou yo
Are you raising a kid author? Bring your child to meet published writers Edwin Bonilla, 7, Delphine N. Dauphin, 7, Kimbriah Alfrenar, 13, and Phanesia Pharel, 17.After a craft talk with the authors, attendees will participate in a short workshop with writer and artist Carol Todaro to learn to make books.

First Draft: Ébauches & Banbòch – A creative writing workshop*
In a fun (banbòch!), supportive and professional environment, author Fabienne Josaphat will teach effective writing techniques to allow writers to give voice to stories about their Caribbean-American experience. *In English, French, and Haitian Creole

“On the Verge of a Fever” – A film screening presented by Ayiti Images
Against the backdrop of poverty, fear and the brutal dictatorship of Haiti in 1971, On the Verge of a Fever (Le goût des jeunes filles) is about Fanfan, a fifteen-year-old boy who just wants to experience life for himself with his streetwise friend Gégé. Having lived a somewhat sheltered life with his protective mother, Fanfan experiences a bizarrely terrifying incident involving a Tonton-Macoute. As a result, he decides to hide out at his beautiful neighbor’s house for the weekend. There, he is trapped between his fear of being caught and the fulfilling of his deepest fantasy. Based on the novel by renown Haitian novelist Dany Laferriere. Directed by John L’Ecuyer.

“Race & Identity: The Diaspora Divide” / “Ras & Idantite: Divizyon nan Dyaspora a”*
This panel will offer insight on the strained relationship between Caribbean Americans and African Americans in South Florida, as both groups face similar social challenges, and are often pressured to redefine their black identities. Maude Heurtelou and Hervé Fanini-Lemoine will discuss the urgency of solidarity, so that the space between “us” and “them” might finally collapse. *A presentation in Creole with simultaneous interpretation in English

Self-Publishing Strategies for Authors / Estrateji pou Otè ki vle Pibliye poukont yo
Thinking about self-publishing your book? Bito David has the answer to all of your questions! Get the inside scoop on publishing strategies and get to understand the “state of play” in self-publishing today.

“Danses Folkloriques” / “Dans Fòlklorik”
From Yanvalou to Rara, Haitian folk dance is one of the most expressive ways to learn about Haitian history and culture. This workshop will teach dances full of opposites, subtle and dynamic, graceful and ragged, the vibrant tones and rhythms of the drums creating calm, balance, sensuality, and passion.

Vodou Immersion / Atelye sou Vodou
To the non-practitioners, Vodou is too often dismissed as a primitive practice with strange connotations. It’s been sensationalized, trivialized and parodied. If you’re curious about Vodou and its real meaning, you’re invited to fully immerse during a live, heartfelt ceremony. Learn about Vodou vèvès, ceremonial songs and ritual drumming, and feel the Spirits invoked by a real mambo.

The Little Haiti Book Festival, (formerly known as the Haitian-Caribbean Book Festival) which has been presented in part by Sosyete Koukouy of Miami Inc., for the past four years, has partnered with Miami Dade College’s Miami Book Fair, widely considered to be the best book festival in the United States, and continues to count on the support of Miami-Dade County Cultural Affairs, the City of Miami and Commissioner Keon Hardemon, the Little Haiti Cultural Complex, the John and James L. Knight Foundation, The FIU Kimberly Green Latin American and Caribbean Center, the Green Family Foundation, the Haitian Consulate, HALO (Haitian American Leadership Organization), Haitian Women of Miami, SANT LA, Libreri Mapou Bookstore, and the Haitian Cultural Arts Alliance, among others.

Sosyete Koukouy of Miami
Established in 1985, Sosyete Koukouy of Miami, Inc. (Sos*ye*te Koo*Kouy), is dedicated to preserving Haitian culture in the United States through education and arts and cultural presentations. Its mission is to preserve, perpetuate and present Haitian cultural performances and exhibitions to Creole and non-Creole speaking audiences. In support of that mission, Sosyete Koukouy presents and produces cultural programs that increase awareness of Haitian people, its language, rituals and traditions, and its deep roots in the African continent. It also produces programs that foster greater understanding between Haitian people and people of other diverse ethnicities, cultures and heritage; and foster respect for the arts and artists of Haiti, African and Caribbean by raising awareness of their historical and artistic contributions to the national and international cultural landscape. Contact: Jan Mapou: 305-757-9922

Thank you to our sponsors