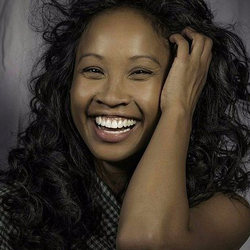 Khmer-American Poet Peuo Tuy recently visited Miami as part of Miami Book Fair’s Big Read month-long series of events that focused on Cambodian history and culture. During her stay, she conducted a series of visits to Miami Dade College and area high schools to give talks and workshops on trauma and healing through poetry. Miami Book Fair interviewed Peuo about her poetry Collection Khmer Girl, and how writing and performing poetry has shaped her own healing from trauma.

Q. Many of the poems in Khmer Girl reflect a struggle to create an individual identity for yourself outside of the cultural pressures of your family and American society. Can you talk a little about the struggle to forge your own identity given the competing pressure of two different cultures?
A. While I was going through the U.S. school system, I was struggling to be a traditional Cambodian girl/adolescent. The responsibilities of a young Khmer girl or Khmerwoman were very different from a young Khmer man or Khmer man.  I was not allowed to do many things. I was not allowed to go out and see new movies with my friends, hang-out with my friends, and join extracurricular activities after school. I had to help out with a lot of chores. I refuted a lot these responsibilities. There were often many disagreements and verbal fights between myself and my parents. On the other hand, I learned a lot of cultural norms and traditions from my parents that I valued, such as respecting and honoring ancestors/living elders, for example.

My struggle to forge my own identity didn’t really unfold itself until my late twenties and early to mid-thirties. While I was in elementary, middle school, and high school I was trying to find myself and trying to fit in…in whatever way possible. I had no clue who I was. I didn’t even know that I had so much self-hatred. It took me quite a while to find my identity. I would say it took me close to thirty-five years to finally love myself.

Q. How do you identify yourself now? As Khmer? American? Or someone in-between?
A. When I moved to New York City in 1999, that was the turning point. I found myself and my identity through spoken word poetry. It was because of the purging of poems that led me to realize who I was. Currently, I identify myself as a Khmer American living in the United States of America. Parts of me are Khmer, part of me is New York, part of me is Lowell, Massachusetts, and part of me is some of America.

Q. Can you talk a little about the difference between inherited memory and/or trauma and firsthand memory and/or trauma, and how each affected you as you were growing up?
A. The trauma that my parents experienced was passed down to me and my siblings. This inherited intergenerational trauma was present while I was growing up as a child and as an adolescent, and it still lives in me as an adult.  I became aware of this type of trauma more in my mid-thirties than in my teens or twenties. I realize now that my parents were hard workers. Because they did not speak English and they worked two – three jobs so that they could feed their children, my siblings and I rarely saw them. We saw them in the evenings shortly, and sometimes we didn’t see them both at the same time for dinners. They never really spoke about the genocide and if they did speak about it, it would be snippets of the atrocity— who died and what the Khmer Rouge did. They did not speak about how they felt and how deeply affected they had become from the atrocity. The depression, stress, and anxiety ate them up slowly.

My parents did not go to therapy, ever. Their PTSD was buried for many years. My mom’s PTSD is still buried in her heart to this day. (My dad passed away in 2008).  I would hear them speak (at times) about the genocide when I was an adolescent. I could see in their eyes they were sad and angry, but I did not really understand and did not know what to do at that time. I did not even really understand the Khmer Rouge, the roles the U.S. and Cambodia played in the Vietnam War. I was clueless. Also, in our household, many problems that would arise were not solved diplomatically. Usually it was solved by denigrating each other or the other person. My parents and siblings often did that to each other. I am guilty of the same actions. All of these actions were passive-aggressive and were part of their depression and trauma. They did not know how to deal with difficult situations. Their silence trauma scarred us for decades.

Q. Your book deals a lot with silences, and speaking out about things that your family and many in the Khmer culture don’t discuss. For example, you mention that your parents didn’t talk much about the situation in Cambodia before your family left for Thailand, and eventually the United States. How difficult was it to write Khmer Girl?
A. Physically it was not difficult to write Khmer Girl. Because I wanted to find healing and self-love, many poems came out of my gut and my heart. Through many tears, frustration, and self-sabotaging I knew the light at the end of the tunnel would amount to my finding self-love, so therefore, I didn’t mind going through the pain of writing the book. The most difficult part for me was— how was I going to tell my parents, siblings, the Khmer community what I found out and what I’ve been feeling all these decades. How was I going to talk about going against the traditional and cultural norms?

Q. You visited Miami Dade College and area high school classes during your visit, and worked with students on trauma and healing in your poetry workshops. Can you talk about the role poetry has played in your own healing?
A. In 2003, for one of my undergraduate classes, I chose to write a paper about how the role of European beauty affects young girls of color, adolescents of color and women of color.  I didn’t know, during that time (I was in my early twenties), that war and genocide affected me so deeply; that my parents’ traumas from those atrocities affected them so deeply. I was dealing with my own self-hate and trying to find self-love; trying to find my own identity or struggling with being traditional Khmer and being Khmer American. Because I was struggling so much with finding this self-love…poetry became my savior.

Poetry has played a significant role in my healing. To me it was easier than writing a novel. I love that I have the freedom to write snippets of my life and leave some room for the audience to think what my next actions could be. Through reading and listening to other renown poets, I found my voice and felt comfortable sharing my work with others. I felt that the only way for me to find self-love is to keep writing, reading and listening to other people’s poetry, and performing/reading my own work.

Q. How does your work extend your own healing to others?
A. During the beginning of my poetry career, I wrote and performed my own poems because I desperately needed healing and wanted to find self-love. I now focus on using my poems and other poets’ poetry to heal others in poetry workshops to underserved, immigrant, and people of color communities. When I read, and perform my spoken word (without the workshops), I provide a space where youths, women, and people of color can comment, ask questions, have discussions on race, exoticism, racism, orientalism, sexism, immigrant/refugee life, militarism, color, etc.