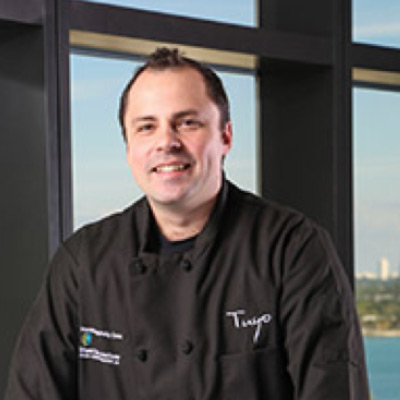 (Santos, Victor) Chef Victor Santos emerged on the Miami culinary scene a decade ago after graduating from the Art Institute of Fort Lauderdale and wasted no time making his mark. The native of Brazil honed his culinary and entrepreneurial skills while co-owning the famed Asian noodle business I Kyu Noodles, which put him in touch with some of South Florida’s top chefs. Chef Santos was an integral part of the opening team for the luxurious Canyon Ranch Hotel & Spa on Miami Beach, where he developed menu items that accentuated the flavors of the region. Following his work at Canyon Ranch, Chef Santos moved to Rhode Island where he worked as a sous chef for Ted Gidley at the famed Clarke Cooke House restaurant, known throughout New England for its fine dining. It was there that classical French cuisine made an impact on his life and also where he developed the passion for creating menus using contemporary cooking techniques married with traditional flavors. Today, as executive Chef at Miami’s Tuyo, Chef Santos continues the restaurant’s tradition of serving stunning food in a stunning atmosphere.