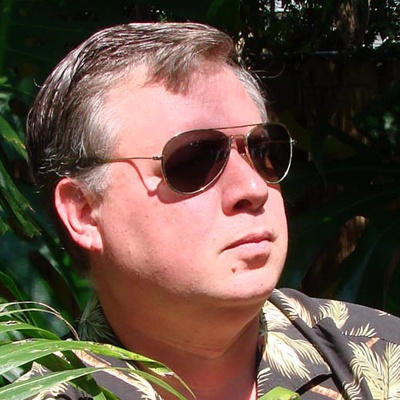 Tim Dorsey was a reporter and editor for the Tampa Tribune from 1987 to 1999, and is the author of twenty-one novels, including: Pope of Palm Beach, Coconut Cowboy, Shark Skin Suite, Tiger Shrimp Tango, Pineapple Grenade, Nuclear Jellyfish, Atomic Lobster, Hurricane Punch, The Big Bamboo, Torpedo Juice, Cadillac Beach, The Stingray Shuffle, Triggerfish Twist, Hammerhead Ranch Motel, Florida Roadkill, and others. In No Sunscreen for the Dead: A Novel (Serge Storms) (William Morrow) Serge and Coleman are back on the road, ready to hit the next stop on their list of obscure and wacky points of interest in the Sunshine State. This time, Serge’s interest is drawn to one of the largest retirement villages in the world—also known as the site of an infamous sex scandal between a retiree and her younger beau that rocked the community. What starts out as an innocent quest to observe elders in their natural habitats, sample the local cuisine, and scope out a condo to live out the rest of their golden years, soon becomes a Robin Hood-like crusade to recover the funds of swindled residents. But as the resident’s rally for Serge to seek justice on their behalves, two detectives are hot on the heels of Serge and Coleman’s murderous trail. In this epic adventure that jumps between present day and the tumultuous times of the Vietnam war, mystery fans are in for a witty and deliciously violent delight from the twisted imagination of bestselling author Tim Dorsey.