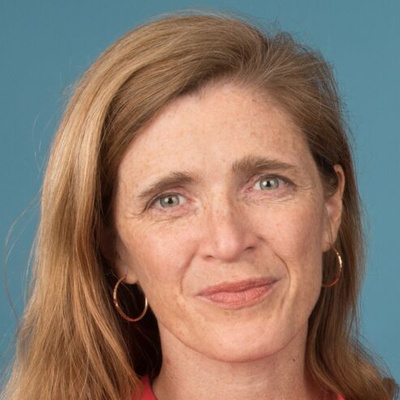 Samantha Power is the Professor of the Practice of Global Leadership and Public Policy at Harvard Kennedy School and Professor of Practice in Human Rights at Harvard Law School. She served in the Cabinet of President Barack Obama and as US Ambassador to the United Nations (2013 – 2017). From 2009 to 2013, Power worked on the National Security Council as Special Assistant to the President for Multilateral Affairs and Human Rights. Her book “A Problem from Hell”: America and the Age of Genocide won the Pulitzer Prize in 2003. She is also the author of the New York Times bestseller Sergio: One Man’s Fight to Save the World. Power began her career as a journalist reporting from countries including Bosnia, East Timor, Rwanda, and Sudan, and she has been named by TIME as one of the world’s 100 Most Influential People and by Forbes as one of the World’s 100 Most Powerful Women. In her memoir, The Education of an Idealist (Dey Street Books) Power offers an answer to the question “What can one person do?” — while tracing a distinctly American journey from immigrant, to war correspondent, to presidential Cabinet official. In 2005, her critiques of US foreign policy caught the eye of newly elected senator Barack Obama, who invited her to work with him on Capitol Hill and then on his presidential campaign. The Education of an Idealist lays bare the searing battles and defining moments of her life, political and personal. In the process, it illuminates the intricacies of politics and geopolitics. Secretary of State Madeline Albright said that Power’s “[…] absorbing, heartfelt, and remarkably candid memoir provides vivid new details about the difficult strategic questions that arose during her years in the Obama administration, and offers essential lessons to anyone aspiring to follow in her footsteps in shaping the world for the better.”