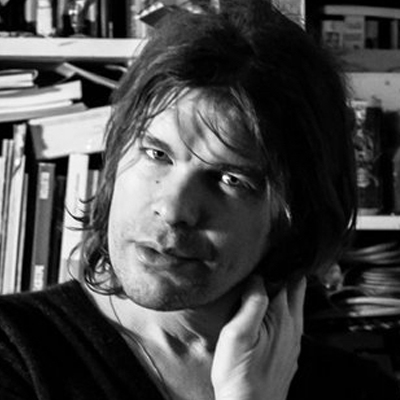 Paul Pope is an American artist/designer living and working in New York City. His most recent book, Battling Boy, debuted at #1 on the New York Times best-seller list. It’s his third book to hit the NYT Top 10. His iconic Batman: Year 100, a science-fiction take on the classic Batman origin tale, appears frequently on many Top 10 Batman story lists. In 2010 Pope was recognized as a Master Artist by the American Council of The Arts. His short science fiction comic strip Strange Adventures (DC Comics)– an homage to the Flash Gordon serials of the ’30s– won the coveted National Cartoonist Society’s Reuben Award for Best Comic Book of the year. He has won 5 Eisners to date. Heavy Liquid (Image comics) is a sci-fi/cyberpunk classic celebrating its 20th anniversary. Time Magazine listed Heavy Liquid among the 100 most important science fiction graphic novels of the decade. In a future where New York has evolved into a sci-fi metropolis, a man named S becomes entwined in a mystery that’s littered with love and drugs, and in particular, an addictive substance called “heavy liquid” that’s both a drug and an art form. In his search, S finds himself battling deadly foes as well as the inner demons of addiction, but if he can survive these trials, he might discover the shocking secret behind “heavy liquid.” Library Journal noted that “Drawing inspiration from noir films, cyberpunk, manga, and the world of high fashion, this work has a influenced an entire generation of cartoonists but remarkably still feels fresh today.”