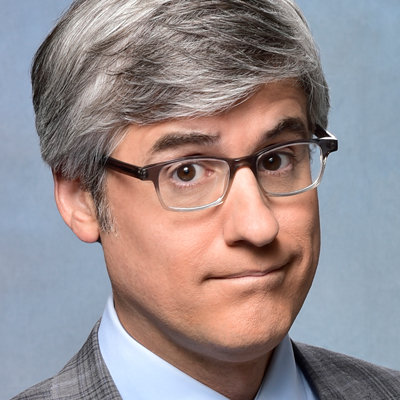 Mo Rocca is a correspondent for CBS Sunday Morning, host of The Henry Ford’s Innovation Nation, and host and creator of the Cooking Channel’s My Grandmother’s Ravioli, in which he learns to cook from grandmothers and grandfathers across the country. He’s a frequent panelist on NPR’s hit weekly quiz show Wait, Wait…Don’t Tell Me!,  spent four seasons as a correspondent on Comedy Central’s The Daily Show with Jon Stewart, and four seasons as a correspondent on The Tonight Show with Jay Leno. Rocca began his career in TV as a writer and producer for the Emmy and Peabody Award-winning PBS children’s series Wishbone. He went on to write and produce other children’s series, including ABC’s Pepper Ann and Nickelodeon’s The Wubbulous World of Dr. Seuss. He is the author of All the Presidents’ Pets, a historical novel about White House pets. In Mobituaries (Simon & Schuster), the journalist, humorist, and history buff profiles the people who have long fascinated him. In these pages, Rocca chronicles the stories of the people who made a difference, but whose lives—for some reason or another—were never truly examined. There’s Thomas Paine, whose Common Sense lit the fuse for the American Revolution—and whose paltry obit summed up his life thusly: “He had lived long, did some good, and much harm.” And then there’s screen icon Audrey Hepburn. How much do we know about her wartime upbringing and how it shaped the woman we fell in love with? And what about Billy Carter and history’s unruly presidential brothers? Were they ne’er-do-well liabilities…or secret weapons? Mobituaries is an insightful and unconventional account of the people who made life worth living for the rest of us, one that asks us to think about who gets remembered, and why.