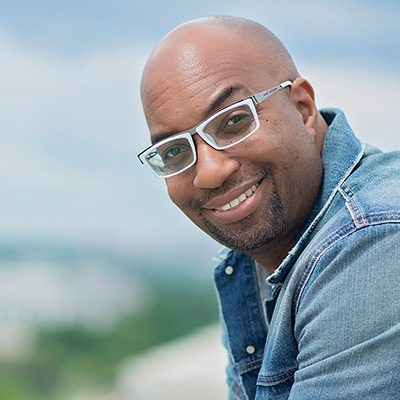 (Alexander, Kwame) Kwame Alexander is a poet, speaker, educator, and New York Times bestselling author of twenty-four books, including The Crossover, which received the 2015 John Newbery Medal for the Most Distinguished Contribution to American Literature for Children. His other works include the novels He Said, She Said and Booked, as well as his nonfiction debut, The Playbook: 52 Rules to Aim, Shoot, and Score in This Game Called Life. He is the cofounder of LEAP for Ghana, an international literacy program. Solo (Blink YA Books), Alexander’s YA novel written in poetic verse co-written with Mary Rand Hess, tells the story of seventeen-year-old Blade Morrison, the son of a washed-up rock star, who travels to Ghana and discovers a friendship he couldn’t have imagined, and a reconciliation he never expected. “With all the chaos, confusion, and angst of teenage life, I believe teens need a little bit of hope and love. And joy,” said Alexander. “What better way to find a thrill than through music. Solo is ultimately a book about a young musician finding his purpose—understanding what really matters in his world, what really matters to him. I hope readers realize through this book the importance words and music can play in their lives. And I hope that readers want to read more books that engage, entertain and empower.”