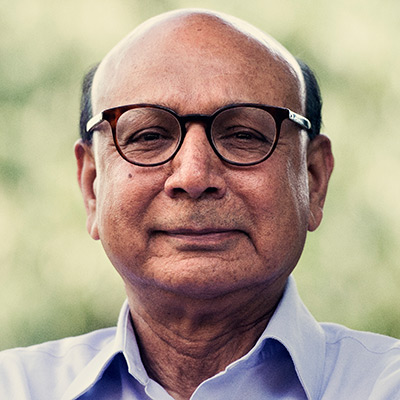 (Khan, Khizr) Khizr Khan was born the eldest of ten children, in rural Pakistan. He moved to the United States with his wife, Ghazala, in 1980. The couple became American citizens and raised three sons. Their middle son, U.S. Army captain Humayun Khan, was killed in Iraq in 2004 while stopping a suicide attack, and was posthumously awarded a Purple Heart and Bronze Star. Khizr Khan holds a B.A. degree from the University of the Punjab, an LL.B. from Punjab University Law College, and an LL.M. from Harvard Law School. Khan’s law practice includes complex civil litigation, electronic discovery, health privacy compliance law, and civil rights and veterans’ rights advocacy. During the 2016 Democratic National Convention, Khan electrified viewers around the world when he took the stage offered to lend Donald Trump his own much-read and dog-eared pocket Constitution. In An American Family: A Memoir of Hope and Sacrifice (Random House), Khan presents a stirring, timeless, and urgent defense of the rights, dignities, and values enshrined in the American system. In This is Our Constitution (Knopf Books for Young Readers), Khan presents a book for young people about the Constitution—what it says and why it matters for everyone.