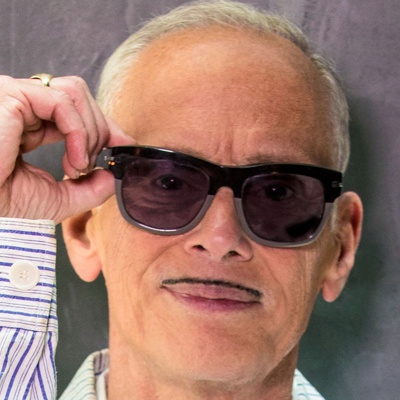 John Waters is an American film director, screenwriter, actor, stand-up comedian, journalist, visual artist, and art collector. He is also the author of the best-selling Role Models (2010) and Carsick (2014). His spoken-word shows This Filthy World and A John Waters Christmas continue to be performed around the world. He rose to fame in the early 1970s for his transgressive cult films, especially Pink Flamingos Female Trouble, and Desperate Living, which he has called the Trash Trilogy, as well as (slightly) more mainstream films Polyester and Hairspray, which was turned into a Broadway hit. All of which explains why no one knows more about everything―especially everything rude, clever, and offensively compelling―than John Waters. The man in the pencil-thin mustache, one of the world’s great sophisticates, and in Mr. Know-It-All (Farrar, Straus and Giroux) he serves it up well-done, and done more than once. Learn his advice on how to fail upward in Hollywood; how to develop musical taste, from Nervous Norvus to Maria Callas; how to build a home so ugly and trendy that no one but you would dare live in it; more important, how to tell someone you love them without emotional risk; and yes, how to cheat death. Mr. Know-It-All features cameos by a cast of dozens, from Divine, Mink Stole and Johnny Depp, to Kathleen Turner, Patricia Hearst, and Tracey Ullman, and it’s illustrated with unseen photos from the author’s personal collection. In The New York Times Book Review Alan Cumming noted “That John Waters is a national treasure is a surety. Period. Thank you and good night . . . [Mr. Know-It-All] shows a vulnerability and an honesty and an almost frantic desire to impart to us, before he can no longer, his manic mantras, his obsessive treatises and his biting and blisteringly honest bons mots that are actually really enlightening life lessons.”