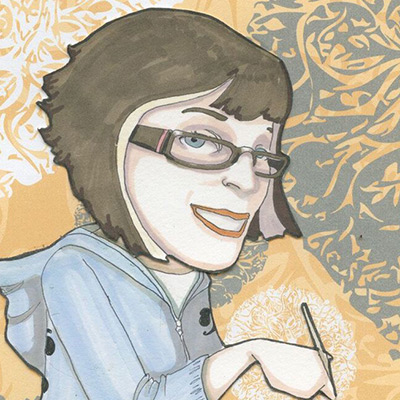 (Lee, Janet) Janet K. Lee made her first foray into illustration in 2010, co-creating Return of the Dapper Men with writer Jim McCann. Return of the Dapper Men garnered a record-setting five Eisner nominations in 2011, and won the Eisner Award for Best New Graphic Album. For her work on Return of the Dapper Men, Lee also received a nomination for the Russ Manning Award for most promising newcomer. Since then, she has illustrated many more books and contributed to several anthologies. Return of the Dapper Men (Top Shelf Productions) welcomes readers to Anorev, a land where time has no meaning. Robots work and children play, but the play is no fun and the work is no use. A curious boy named Ayden and his robot friend Zoe know that something’s missing, but they can’t imagine what it might be… until 314 identical men in green bowler hats fall from the sky. Blending clockwork whimsy with majestic art-nouveau visuals, Jim McCann and Janet Lee present a hand-crafted fairy tale that feels both familiar and entirely new.