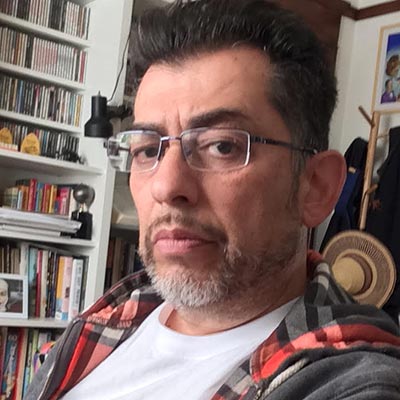 Jaime Hernandez is the co-creator, along with his brothers Gilbert and Mario, of the comic book series Love and Rockets. Since publishing the first issue of Love and Rockets in 1981, Jaime has won an Eisner Award, 12 Harvey Awards, and the Los Angeles Times Book Prize. The New York Times Book Review calls him “one of the most talented artists our polyglot culture has ever produced.” He is the author of The Dragon Slayer: Folktales from Latin America (TOON Graphics). How would a kitchen maid fare against a seven-headed dragon? What happens when a woman marries a mouse? And what can a young man learn from a thousand leaf cutter ants? Famed Love and Rockets creator Jaime Hernandez asks these questions and more as he transforms beloved myths into bold, stunning, and utterly contemporary comics. Guided by the classic works of F. Isabel Campoy and Alma Flor Ada, Hernandez’s first book for young readers brings the sights and stories of Latin America to a new generation of graphic-novel fans around the world.