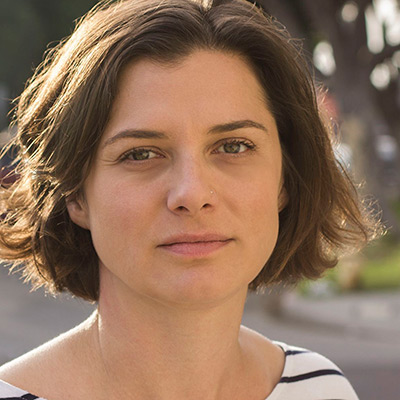 (Pochada, Ivy) Ivy Pochoda is the author of the critically acclaimed novel Visitation Street. Her writing has appeared in the New York Times, the Wall Street Journal, the Los Angeles Review of Books, the Huffington Post, Self, and House & Garden. Her first novel The Art of Disappearing, was published by St. Martin’s Press in 2009. She has a BA from Harvard College in Classical Greek and an MFA from Bennington College in fiction. Her latest novel Wonder Valley (Ecco) is a visionary and masterful portrait of contemporary Los Angeles. It’s a familiar sight in Los Angeles, traveling on the 110 during peak morning rush hour: an endless sea of commuters, with no respite for miles. But this traffic jam is different—a runner is dodging and weaving between the cars at an astonishing clip. He’s moving so fast he’s almost a blur. But what’s clearly evident is that he is completely naked. This seemingly mundane highway backup turns into a seminal moment for a handful of Angelenos-people whose lives are in desperate need of a change. Out of this ordinary event, Ivy Pochoda spins a web that stretches all over the City of Angels. Whether running away from the past, or looking to reclaim their future, they all will do anything for a semblance of peace.