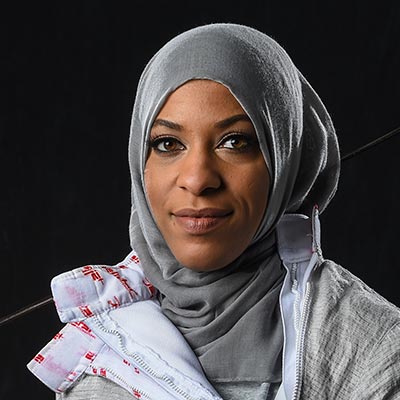 Ibtihaj Muhammad is a fencer and the first Muslim American woman in hijab to compete for the United States in the Olympic Games. She is also the first female Muslim American to medal at the Olympic Games, winning bronze in the women’s saber team event. Named one of TIME magazine’s 100 Most Influential People In the World, she serves as a sports ambassador for the U.S. State Department, cofounded Athletes for Impact and the clothing company Louella, and inspired the first hijabi Barbie in her likeness. She is the author of Proud: My Fight for an Unlikely American Dream (Hachette Books).  Growing up in New Jersey as the only African American Muslim at school, Ibtihaj Muhammad always had to find her own way. When she discovered fencing, a sport traditionally reserved for the wealthy, she had to defy expectations and make a place for herself in a sport she grew to love. Ibtihaj was poised for success, but the fencing community wasn’t ready to welcome her with open arms just yet. As the only woman of color and the only religious minority on Team USA’s saber fencing squad, Ibtihaj had to chart her own path to success and Olympic glory. Proud is a moving coming-of-age story from one of the nation’s most influential athletes that illustrates how she rose above it all.