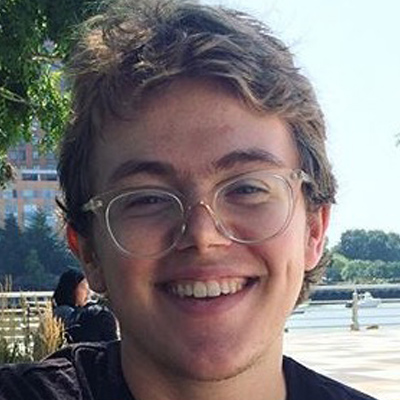 Hal Schrieve grew up in Olympia, Washington, has a BA in history with a minor in English from University of Washington and studies library science at Queens College, New York. Hir poetry has appeared in Vetch magazine. In Out of Salem (Triangle Square), Schrieve’s first novel, genderqueer fourteen-year-old Z Chilworth has to adjust quickly to their new status as a zombie after waking from death from a car crash that killed their parents and sisters. Always a talented witch, Z now can barely perform magic and is rapidly decaying. Faced with rejection from their remaining family members and old friends, Z moves in with their mother’s friend, Mrs. Dunnigan, and befriends Aysel Tahir, a fat, Turkish-American lesbian who faces life-threatening danger if anyone discovers she’s an unregistered werewolf. When a local psychiatrist is murdered by what seems to be werewolves, the town of Salem, Oregon, becomes even more hostile to “monsters,” and Z and Aysel are driven together in an attempt to survive a place where most people wish that neither of them existed. Kirkus Reviews noted that, “set in 1997, this darkly humored fantasy explores censorship, government surveillance, homelessness, and real-world (not just magical) forms of oppression.”