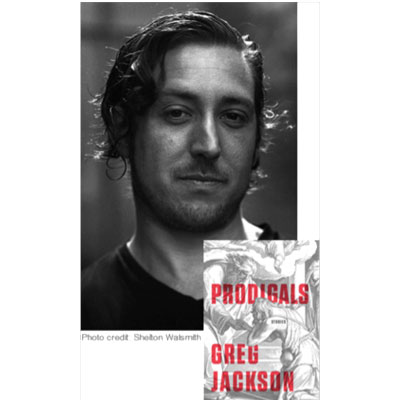 Greg Jackson’s work has appeared in The New Yorker, Granta, and the Virginia Quarterly Review. He has been a fiction fellow at the Fine Arts Work Center in Provincetown and a resident at the MacDowell Colony, and he holds an MFA in creative writing from the University of Virginia.

ABOUT THE BOOK
“People are bullets, fired,” the narrator declares in one of the wild, searching stories that make up Greg Jackson’s Prodigals. A filmmaker escapes New York, accompanied by a woman who may be his therapist, as a violent storm bears down. A lawyer in the throes of divorce seeks refuge at her seaside cottage only to find a vagrant girl living in it. A dilettantish banker sees his ambitions laid bare when he comes under the influence of two strange sisters. A group of friends gathers in the California desert for one last bacchanal, and a journalist finds his visit to the French country home of a former tennis star taking a deeply unnerving turn.

Strivers, misfits, and children of privilege, the restless, sympathetic characters in Jackson’s astonishing debut hew to passion and perversity through life’s tempests. Theirs is a quest for meaning and authenticity in lives spoiled by self­-knowledge and haunted by spiritual longing. Lyrical and unflinching, cerebral and surreal, Prodigals maps the degradations of contemporary life with insight and grace, from the comedy of our foibles, to the granular dignity of experience, to the pathos of our yearning for home.