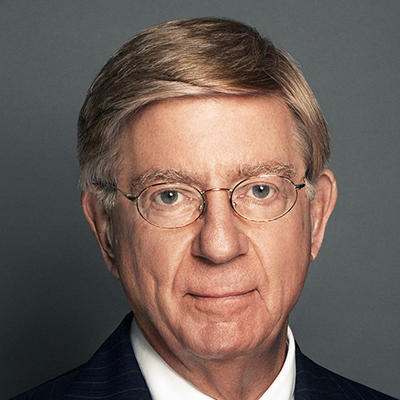 Pulitzer Prize-winning columnist George F. Will has written fourteen books including One Man’s America, Men at Work, and Statecraft as Soulcraft.  He writes a twice-weekly syndicated column on politics and domestic and foreign affairs for the Washington Post. The Wall Street Journal once called him “perhaps the most powerful journalist in America.“  He began his column with The Post in 1974, and received the Pulitzer Prize for Commentary in 1977. He is also a regular contributor to MSNBC and NBC News. In The Conservative Sensibility (Hachette Books), Will examines how the Founders’ belief in natural rights created a great American political tradition. Articulated first in the Declaration of Independence and carried out in the Constitution, the Founders gave the new republic a framework for government unique in world history. Their beliefs in natural rights, limited government, religious freedom, and in human virtue and dignity ushered in two centuries of American prosperity. Now, as Will shows, conservatism is under threat –both from progressives and elements inside the Republican Party. Senator Ben Sasse (R, Nebraska), a New York Times-bestselling author, called The Conservative Sensibility “A monumental achievement. [It] is not a ‘Washington book’ about partisan politics–it’s much bigger than that. It’s a career capstone that will stir your soul with its passionate reminder of what conservatism really means.”