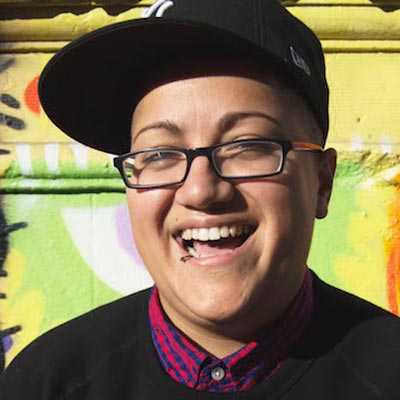 Gabby Rivera is a queer Latinx writer living in Brooklyn, NY. Gabby’s critically acclaimed debut novel Juliet Takes a Breath was listed by Mic as one of the 25 essential books to read for women’s history month, and it was called the “dopest LGBTQA YA book ever” by Latina. She is currently writing America (Marvel). America is Marvel’s first Latina lesbian superhero.At last! Everyone’s favorite no-nonsense powerhouse, America Chavez, gets her own series! Critically acclaimed young-adult novelist Gabby Rivera and all-star artist Joe Quinones unite to shine a solo spotlight on America’s high-octane and hard-hitting adventures! She was a Young Avenger. She leads the Ultimates. And now she officially claims her place as the preeminent butt-kicker of the entire Marvel Universe! But what’s a super-powered teenager to do when she’s looking for a little personal fulfillment? She goes to college! America just has to stop an interdimensional monster or two first and shut down a pesky alien cult that’s begun worshipping her exploits before work can begin. Then she can get on with her first assignment: a field trip to the front lines of World War II – with Captain America as her wingman!