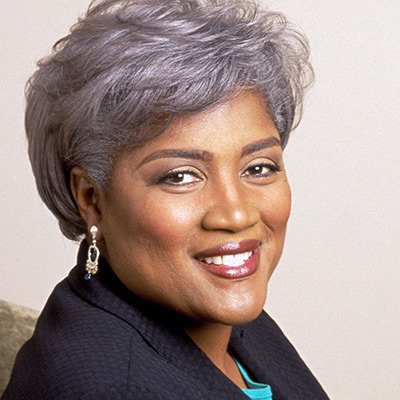 (Brazile, Donna) Veteran Democratic political strategist Donna Brazile is an adjunct professor, author, syndicated columnist, television political commentator, Vice Chair of Voter Registration and Participation at the Democratic National Committee, and former interim National Chair of the Democratic National Committee, as well as the former chair of the DNC’s Voting Rights Institute. In August 2009, O, The Oprah Magazine chose Ms. Brazile as one of its 20 “remarkable visionaries” for the magazine’s first-ever O Power List. In addition, she was named among the 100 Most Powerful Women by Washingtonian magazine, Top 50 Women in America by Essence magazine, and received the Congressional Black Caucus Foundation’s highest award for political achievement. During the chaotic 2016 presidential campaign, Democrats turned to Brazile to right the ship. After all, she was no stranger to high stakes and dirty opponents. And the longtime Democratic strategist had a reputation in Washington as a one-stop shop for fixing sticky problems. What Brazile found at the DNC, however, was unlike anything she had experienced before–and much worse than is commonly known. That story is told in Hacked: The Inside Story of the Break-ins and Breakdowns That Put Donald Trump in the White House Packed with never-before-reported revelations about what went down in 2016, Hacks is equal parts campaign thriller, memoir, and roadmap for the future. With Democrats now in the wilderness after this historic defeat, Hacks argues that staying silent about what went wrong helps no one. Only by laying bare the missteps, miscalculations, and crimes of 2016, Brazile contends, will Americans be able to salvage their democracy.