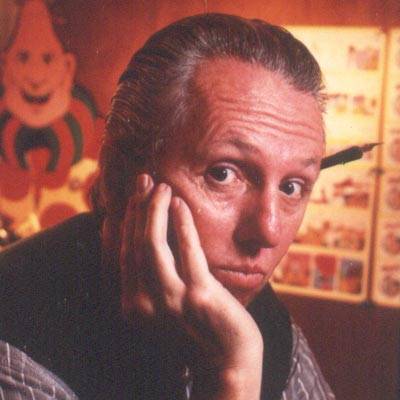 “Are we having fun yet?” This non sequitur utterance by the clown-suited philosopher/media star Zippy the Pinhead has become so oft-quoted that it is now in Bartlett’s Familiar Quotations. Zippy’s creator, Bill Griffith, began his comics career in New York City in 1969. His first strips were published in the East Village Other and Screw Magazine and featured an angry amphibian named Mr. The Toad. His first major comic book titles included Tales of Toad and Young Lust, a best-selling series parodying romance comics of the time. He was co-editor of Arcade, The Comics Revue for its seven issue run in the mid-70s and worked with the important underground publishers throughout the seventies and up to the present. The first Zippy strip appeared in Real Pulp #1 (Print Mint) in 1970.Today, Zippy appears in over 200 newspapers worldwide. There have been over a dozen paperback collections of Griffith’s work and numerous comic book and magazine appearances, both here and abroad.