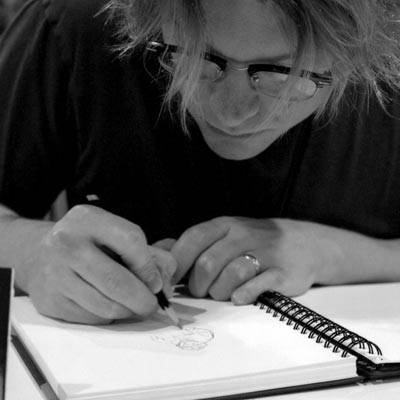 Ben Towle is a three time Eisner-nominated cartoonist, has received accolades from such publications as the New York Times and Publishers Weekly and was a Junior Library Guild selection. His previous work includes Amelia Earhart: This Broad Ocean (with Sarah Stewart Taylor), a graphic novel for young adults; the historical fiction graphic novel Midnight Sun; and a volume of comics folk tales, Farewell, Georgia. His latest book is Oyster War (Oni Press). In the coastal town of Blood’s Haven, the economy runs on oysters. Oyster farming is one of the most lucrative professions, but also the most dangerous. Not just from the unforgiving ocean and its watery depths-there are also oyster pirates to worry about! Commander Davidson Bulloch and his motley crew are tasked with capturing these ne’er-do-wells-but they don’t know that Treacher Fink, the pirates’ leader, possesses a magical artifact that can call forth a legendary spirit with the power to control the sea and everything in it!