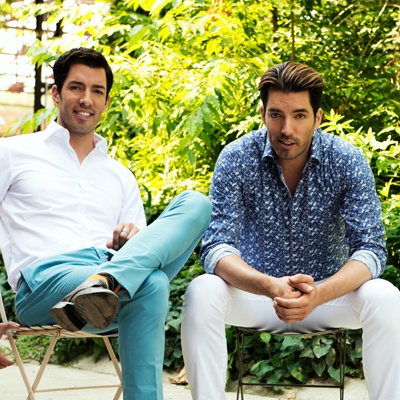 As co-founder and executive producer of Scott Brothers Entertainment, Drew Scott is a multi-faceted entrepreneur who has enjoyed huge success as a co-host of four smash-hit TV series, as well as past achievements in the film and television industry as a producer, director and actor. He has long held an interest in entertainment and began acting in theater, improv, and sketch comedy in his teens. This led to behind-the-camera work freelancing in Vancouver’s film and television industry, and the eventual formation of an independent production company with his brothers. Together they have produced several films that have toured the festival circuit, as well as industry galas such as the Producers Ball, which is held during the Toronto International Film Festival. Jonathan and Drew Scott have taken HGTV by storm with their four hit shows, Property Brothers, Property Brothers at Home, Buying & Selling, and Brother vs. Brother. Their new book, Dream Home: The Property Brothers’ Ultimate Guide to Finding & Fixing Your Perfect House (Houghton Mifflin Harcourt) is a comprehensive source, covering the ins and outs of buying, selling, and renovating a house. The brothers cover numerous topics including the hidden costs of moving, savvy negotiating tactics, and determining your home must-haves. Dream Home also includes all the tips and tricks you won’t see on TV, making it an invaluable resource, not just for fans, but for any current or aspiring homeowner.