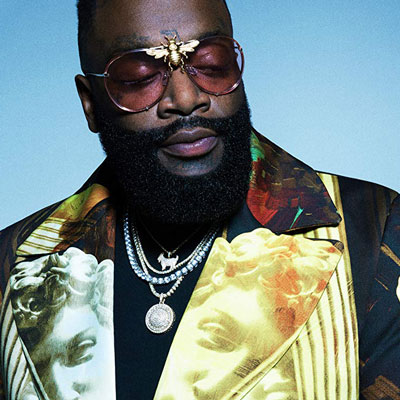 The highly-anticipated memoir from hip-hop icon Rick Ross chronicles his coming of age amid Miami’s crack epidemic, his star-studded controversies, and his unstoppable rise to fame. Making an exclusive appearance in the city that shaped him, Rick Ross will be in conversation with a soon-to-be-announced moderator. The event is held in partnership with the Miami Book Fair.

Rick Ross is an indomitable presence in the music industry, but few people know the full story behind his rise to fame. Now, for the first time, Ross offers a vivid, dramatic and unexpectedly candid account of his early childhood, his tumultuous adolescence, and his dramatic ascendency in the world of hip-hop.

Born William Leonard Roberts II in 1976, Ross grew up “across the bridge,” in a Miami at odds with the city’s glitzy beaches, clubs and yachts. The Coral City projects where Ross came of age stood at the epicenter of the city’s crack epidemic. Surrounded by poverty and gang violence, Ross defied the odds, finishing high school and receiving a football scholarship. To survive he inhabited multiple, often contradicting worlds, working as a correctional officer by day while dealing drugs at night. All the while, he honed his musical talent until a chance encounter changed his life forever.

From his early collaborations with DJ Khaled to his first deal with Def Jam to his breakout hit “Hustlin”” and the numerous health scares, arrests and feuds he had to transcend along to way, Hurricanes is a revealing portrait of one of the biggest stars in the rap game, and an intimate look at the birth of an artist.

In 2006, Ross’ first single “Hustlin’” became a chart-topping hit and launched him to fame. Since then all nine of his albums have landed in the Top 10 of the Billboard 200, including five No. 1 debuts. In 2009 he founded his own record label, Maybach Music Group, which is home to artists Meek Mill, Wale and Gunplay. In 2018 he unveiled RICH by Rick Ross, a collection of luxury grooming products. His tenth album, Port of Miami II, is slated for release in 2019.

About the Author: Rick Ross is an American rapper, songwriter, entrepreneur and founder of the Maybach Music Group. All ten of his albums have landed in the Top 10 of the Billboard 200, including five No. 1 debuts. He has received four Grammy Award nominations, and his single Hustlin” was the first song ever to reach certified platinum status before its associated album was released. He has worked closely with Jay-Z, Kanye West, Diddy, Drake, Lil Wayne and DJ Khaled, among many others. He lives in Miami. Hurricanes is his first book.

Tickets include (1) one entry and (1) one copy of the book, which will be handed out at check in, along with a signing line ticket. Ross will be signing books only, no memorabilia. He will not be personalizing books nor posing for photos.