An Evening With Salman Rushdie on Quichotte: A Novel 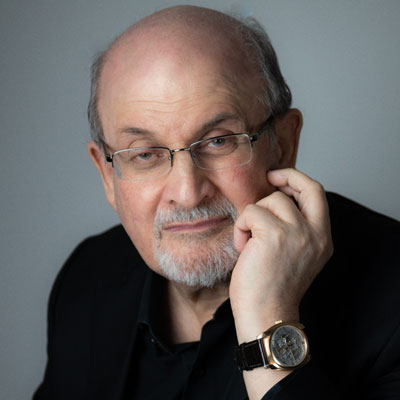 World-renowned storyteller Salman Rushdie is at the height of his power in his highly-anticipated novel QUICHOTTE (Random House; 9/3/2019), an electrifying, modernized classic that fractures and reforms our conception of love in a whirlwind journey across America.

Inspired by Miguel de Cervantes’s world classic, Sam DuChamp, a mediocre writer of spy thrillers, creates Quichotte, a courtly, aging salesman whose television obsession has cost him the ability to distinguish fantasy from reality. His infatuation with the “unreal real” causes him to fall in impossible love with a queen of the screen Miss Salma R. While obsessively writing her love letters, he wishes an imaginary son, Sancho, into existence. Together they set off on a picaresque quest across America in Quichotte’s trusty Chevy Cruze to find Salma and prove his worth, gallantly braving the tragicomic perils of an age where “Anything-Can-Happen.”

Just as Cervantes wrote Don Quixote to satirize the culture of his time, Rushdie takes the reader on a wild ride through a country on the verge of moral and spiritual collapse. And with the kind of storytelling magic that is the hallmark of his work, the fully realized lives of DuChamp and Quichotte intertwine in a profoundly human quest for love and wickedly entertaining portrait of an age in which fact is so often indiscernible from fiction.

Ambitious in its scope and depth, this masterful retelling is a spirited grappling with father–son relationships, sibling quarrels, racism, the opioid crisis, cyber-spies, and the end of the world. Intricately plotted, wildly original, and deeply moving, QUICHOTTE showcases Rushdie at his brilliant best.

Salman Rushdie is the author of thirteen previous novels: Grimus, Midnight’s Children (which was awarded the Booker Prize in 1981), Shame, The Satanic Verses, Haroun and the Sea of Stories, The Moor’s Last Sigh, The Ground Beneath Her Feet, Fury, Shalimar the Clown, The Enchantress of Florence, Luka and the Fire of Life, Two Years Eight Months and Twenty-Eight Nights, and most recently The Golden House. Rushdie is also the author of a book of stories, East, West, and four works of nonfiction: Joseph Anton: A Memoir, Imaginary Homelands, The Jaguar Smile, and Step Across This Line. He is the co-editor of Mirrorwork, an anthology of contemporary Indian writing, and of the 2008 Best American Short Stories anthology.

A fellow of the British Royal Society of Literature, Salman Rushdie has received, among other honors, the Whitbread Prize for Best Novel (twice), the Writers’ Guild Award, the James Tait Black Prize, the European Union’s Aristeion Prize for Literature, Author of the Year prizes in both Britain and Germany, the French Prix du Meilleur Livre Étranger, the Budapest Grand Prize for Literature, the Premio Grinzane Cavour in Italy, the Círculo de Bellas Artes Gold Medal in Spain, the Carlos Fuentes Medal in Mexico, the Crossword Book Award in India, the Austrian State Prize for European Literature, the London International Writers’ Award, the James Joyce Award of University College Dublin, the St Louis Literary Prize, the Los Angeles Public Library Literary Award, the Carl Sandburg Prize of the Chicago Public Library, the Chicago Tribune Literary Prize, the Norman Mailer Prize, and a U.S. National Arts Award. He holds honorary doctorates and fellowships at six European and seven American universities, is an Honorary Professor in the Humanities at M.I.T, and was for ten years a University Distinguished Professor at Emory University. Currently, Rushdie is a Distinguished Writer in Residence at New York University.

He has received the Freedom of the City in Mexico City, Strasbourg, and El Paso, and the Edgerton Prize of the American Civil Liberties Union. He holds the rank of Commandeur in the Ordre des Arts et des Lettres—France’s highest artistic honor. Between 2004 and 2006 he served as President of PEN American Center and for ten years served as the Chairman of the PEN World Voices International Literary Festival, which he helped to create. In June 2007 he received a knighthood in the Queen’s Birthday Honors for services to literature. In 2008 he became a member of the American Academy of Arts and Letters and was named a Library Lion of the New York Public Library. In addition, Midnight’s Children was named the Best of the Booker—the best winner in the award’s forty-year history—by a public vote. His books have been translated into over forty languages.

He collaborated in adapting Midnight’s Children for the stage. It was performed in London, Ann Arbor, and New York by the Royal Shakespeare Company. In 2004, an opera based upon Haroun and the Sea of Stories was premiered by the New York City Opera at Lincoln Center.

A film of Midnight’s Children, directed by Deepa Mehta, was released in 2012. That year, Rushdie was awarded the Canadian Screen Award for best adapted screenplay.

The Ground Beneath Her Feet, in which the Orpheus myth winds through a story set in the world of rock music, was turned into a song by U2 with lyrics by Salman Rushdie.

Tickets are on sale now and include admission for (2) two guests and (1) one copy of the book.