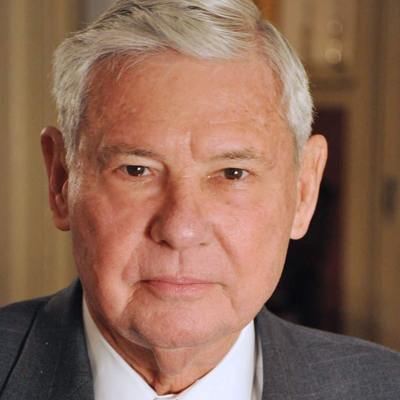 Senator Bob Graham is the former two-term governor of Florida and served for 18 years in the United States Senate. Combined with his 12 years in the Florida legislature Senator Graham has a total of 38 years of public service. One of his most important contributions came during his last term in the Senate, when he was named chairman of the Senate Select Committee on Intelligence. He co-sponsored the bill to create the Director of National Intelligence position and co-chaired the “Joint Inquiry into Intelligence Community Activities Before and After the Terrorist Attacks on September 11, 2001.” Graham later authored 2004’s Intelligence Matters, revealing serious faults in the U.S. national security system. Since retiring from public office in 2005, Senator Graham has been recognized by national and Florida organizations for his public service. His awards include:  The Woodrow Wilson Institute award for Public Service, The National Park Trust Public Service award, The Everglades Coalition Hall of Fame, The Florida Homebuilders Hall of Fame, and the renaming of the largest bridge in Florida—constructed while he was Governor—to the Bob Graham Sunshine Skyway. He also received an honorary doctorate of public service from his alma mater, the University of Florida. Senator Graham has focused his efforts on training the next generation of public leaders to manage the public policy challenges facing Florida, the nation, and the Americas. In that spirit, the latest edition of America, the Owner’s Manual: You Can Fight City Hall-and Win (CQ Press), co-authored with Chris Hand, is a timely, hands-on guide demonstrating how citizens can bring about real change in their communities. By offering concrete guidance, an array of resources, and advice for troubleshooting and overcoming barriers, this compact user’s guide is truly a handbook for change.