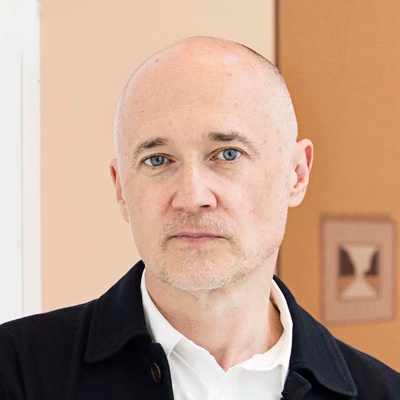 Richard McGuire is a regular contributor to The New Yorker. His comics have appeared in the New York Times, McSweeney’s, Le Monde, and Libération. among other places. He has written and directed for two omnibus feature films: Loulou et Autre Loups (Loulou and Other Wolves), and Peur(s) du Noir (Fear[s] of the Dark). He designed and manufactured his own line of toys, and is the founder and bass player of the no-wave band Liquid Liquid. Here was based on his six page comic that appeared in RAW magazine in 1989. Sequential Drawings: The New Yorker Series (Pantheon) gathers together more than a decade of McGuire’s endlessly inventive spots—a veritable short-story collection—each drawing given its own spread, which, in turn, assures for the reader the experience of delight that the drawings unfailingly deliver. Spot drawings, scattered among the magazine’s text, had been a long-running feature of the New Yorker, and over the years, many artists had contributed them. But McGuire was the first to conceive them as a sequence, and his drawings were something altogether new: deceptively simple images that imbued the series with movement and narrative, telling their own unexpected stories.